We Made A Mistake?!

At first the people watching thought it might have been three window cleaners on just another tall building in New York, but they were wearing odd and colorful football like helmets. They moved about like polka dots on the building.

After some consideration though, it was clear these were three large lady bugs trying to get up to the 14th floor. It was difficult because the night before had been rainy weather and the side of the building was very slippery. And, it was a bit cold as well. The long underwear the lady bugs put on to stay warm was getting wet and was very uncomfortable. It also made the climbing even more difficult. The top lady bug- Lucy the Humpback is yelling at the other two to “move your rear ends!”

Below them there is a dog on the sidewalk barking. This is not helping the ascent, even though it is easier to take than all the horns beeping. The dog does not have it easy because there are more than a dozen other lady bugs on the sidewalk, eagerly looking up to see what happens. All this is made even more difficult because the building is near the airport and the low flying planes make an awful racket!

A cleaning lady inside (it was after regular business hours) invited the Lady Bugs to come in and get warmed up. Marilyn Monroe, the Lady Bug closest to the cleaning lady, who is in the middle in the picture, was crying out, “Don’t let me fall!” She asked the cleaning lady for some Alka-Selzer because she was getting nauseous. The one at the bottom, Bette Davis hollered, “Help! I need help!”

Some of the people watching just don’t like lady bugs (like Judy). Jack who was walking by the door at the time, stopped to watch the different configurations as they crawled upward.

Now that we have investigated this incident further, we have found out that the lady bugs discovered there is bank on the 14th floor of this building with lots of money. They got this information from their friend Al Capone. The robbery plan originally started with them going up the elevator, but they couldn’t get past security. They thought they would crawl up the building. What could go wrong? They were lady bugs after all.

When they got close to the top – the 14th floor – they discovered all kinds of lights that came on and that was the end of the gangster dreams of this lady bug clan. Where did we go wrong? Now they couldn’t do what they planned – to go down the street to the local Wendy’s and get some beef! ###

Written by the residents of Alz Place in Gainesville, FL on June 9, 2017 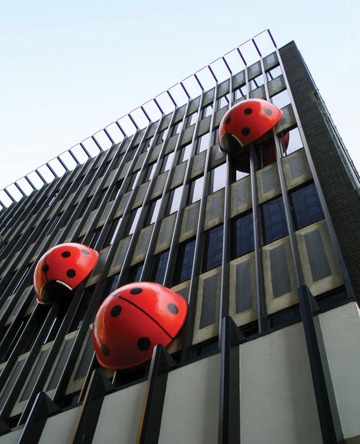