“What Are They Doing For A Living?”

He’s man, getting his shoes shined.
Shining, but rubbing shoes.
Don’t know if their eyes are closed.
There are seats in front for people who want to sit down.
Why don’t they have any women?

Could be any place, open space, a lot of people.
Hell’s kitchen is where they are.
Looks like some females.
Males in men’s clothing.

Do the two men know each other? Not particularly.
He could be getting his shoes done regularly.
So they might know each other.
But possibly come in contact.
Don’t seem to have any women around getting shoes shined.
Don’t see a shoe shine parlor around.

It’s winter time. Men and women have on winter clothing, winter jackets.
A few men, a few women all going in the same direction to the bathroom, going somewhere.

Where is he going? Going home to go to bed. He’s not dressed for heavy weather, just runs his mouth. This is not the place you go for a living, you’re just getting some food, just picking up food in between. Regular clothes, just to have on something.

Where are they from? They are from a long hall there.

Seem like they are feeling alright, going down the hall. Man carrying a knapsack; companion brushing shoes. They think they’re going somewhere important; putting on their Sunday going to meeting clothes. Sweaters.

What are they dreaming? Who seems to be dreaming? He’s dreaming with the mouthwash thing. He’s got a pipe in his mouth, might be trying to wake up. Don’t know. Hope he’s not dreaming.

They probably have a family. He’s getting his shoes shined before he goes home. All going the same way, the toilet is down there. Some think he’s in a good position. They might think a “do nothing” hanging around hotels. They want him to get a real good job. Someone said, “Why don’t he get a real good job?” His wife, maybe?

Does he have a spouse? I’m guessing. Most of them have spouses. He’s out doing this for a living; don’t have steady enough income to support anybody. The spouse is trying to get through the door. I don’t see any children. The children are somewhere else. People are going about their business.

Shoes getting shined. He’s a good provider. He can afford to get his shoes shined. The other man is waiting for his next customer. 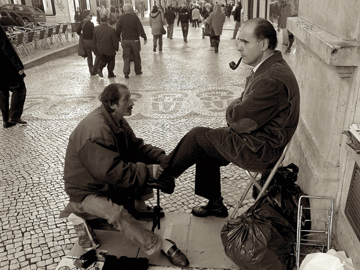