What Could and Shouldn’t Be

It was a cold, rainy day. It was the second day in fact, that it has been raining this hard. Edwin looked out the window in his room and thought to himself, I can't do anything outside... Edwin read most of the books in his room and he got bored of reading the same books. He stopped looking outside his window; he asked a friend earlier if she wanted to come hang out, but she was busy with her shift at a small restaurant, so she said maybe tomorrow. Edwin left his room and headed towards the kitchen. He opened the fridge to find that it was mostly items that needed to be cooked, and he wasn't that great at making his own food. He mostly spent his time at home reading his books instead of helping his parents out with the food. He heard knocking outside the front door, so he went to see who it was. He was surprised to see Anika there. Anika knew Edwin since they were in elementary school because they were neighbors. She has a knack for making food and whatever she made was delicious. He opened the door to get drenched by the rain and she went inside, thanking him for opening the door. Edwin closed the door and how she was here, since she said she was busy. Anika said that she didn't have work today and that they can hang out. She said that she also invited Joshua to hang out with them. Edwin was excited to hang out with people because it became boring to be alone in the house while the rest of his family went to a convention. He wasn't interested, but he became bored as heck. Edwin asked Anika if both of them can whip up something while they waited for Joshua to arrive. She was okay with that idea, and she went to check the fridge. She decided that they can make some chicken tacos, and shesince she hasn't eaten before heading to Edwin's house. When they made the finishing touches, they heard knocking at the door and Edwin went to check who it was. He opened the door to see a package. He looked around to see who left it, but no one was in sight, so he shrugged and put the package near the door inside. He went back to see that Anika had finished the chicken tacos and was already starting to devour one. Edwin said to wait up, and they both were about to fight for the tacos when they heard a loud, single, knock. They both looked at each other, and decide to check out who it was. Anika looked out the window to see that it was Joshua. Joshua knew Edwin in middle school while in a computer class. He used to be on the computer all day long and Edwin checked what he did. Joshua also knew Anika from a conflict they both had with each other about whose food was better; Anika won. Most recently Joshua was using his skills in computer programming to hack some programs and websites, though Edwin and Anikaboth have cautioned him to be careful doing so. Joshua looked around the neighborhood and quivering, as if he knew that he was being hunted or blackmailed. Edwin opened the door and Joshua suddenly bolted into the house and asked if Edwin got a package recently. Edwin asked why, only to see that Joshua took out his laptop and several cords. Anika wasn't up to know why he has those, so she went back to the kitchen to get her tacos. Edwin asked what's the problem, and Joshua told him that there was a secret group of people who knew a secret that could alter what they know as reality. Edwin asked what on Earth could possibly do that, and before he realized it, the package he received earlier emitted a strange, yellow light. When Edwin saw this, he walked to the box and lifted it up. Even though it shined brightly, it was surprisingly light, though there was something inside the box. He opened the box to see a small device that looked like it came from the future. Joshua looked like he knew the end of the world was happening, but Edwin was curious and to what this peculiar device does. He picks it up, and immediately the device starts beeping. Before they both could react, it emits a red light, and everyone was gone. 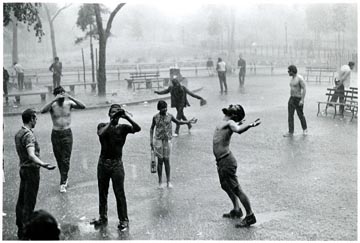