They look naked to me! They’re dummies in a shop window.

But Crissie points out that it’s ok for a gentleman to admire a lady!

They are an older couple and they are married. They are looking at the window and reminiscing. The lady is thinking that she used to step into clothes like that when she was younger!

It looks cold there and the lady likes a warm hand to hold.

The couple seem friendly. They’re looking at the shop, which is called the Hallmark House of Fashion, or Das Modehause. George thinks it might be in Germany because the writing is German.

If the naked shop dummies are there long enough, lots of people will have a sticky beak looking at them. It is cold there. It’s taking place in the winter and the couple are wearing their winter clothes. They have coats and hats.

The lady’s name is Jane and the gentleman’s name is Robert. “That’s a nice name!” says our Robert!

The couple looks happy. They like to buy beautiful things. Crissie says that she wouldn’t go into the shop, she would just look and then move on—window shopping. Winn said if she saw something attractive, she would go in and have a look, or she would keep going. There are extra things to look at. Isobel points out the flowerpot and a stool in the next shop. She likes the flowerpot. If her husband were there, he might enquire about how much it is. He’s a good husband!

Maria tells us that the couple is from Parisi. They are aristocrats and they have money. They like to buy unusual things. It depends on who is controlling the money. The wife thinks about what she spends, but the man will spend it on what he wants! We think the husband will spend it on his wife!

Afterwards, the couple will go to eat some expensive food. Then they will go back to their hotel to talk about their day and what they have seen. The lady might say how much she liked the dresses, but she didn’t know which one she liked best.

The man and wife are very well dressed and they are very happy. They are enjoying their vacation. They’ll have a discussion and perhaps they’ll go back and enquire about what they’re interested in. 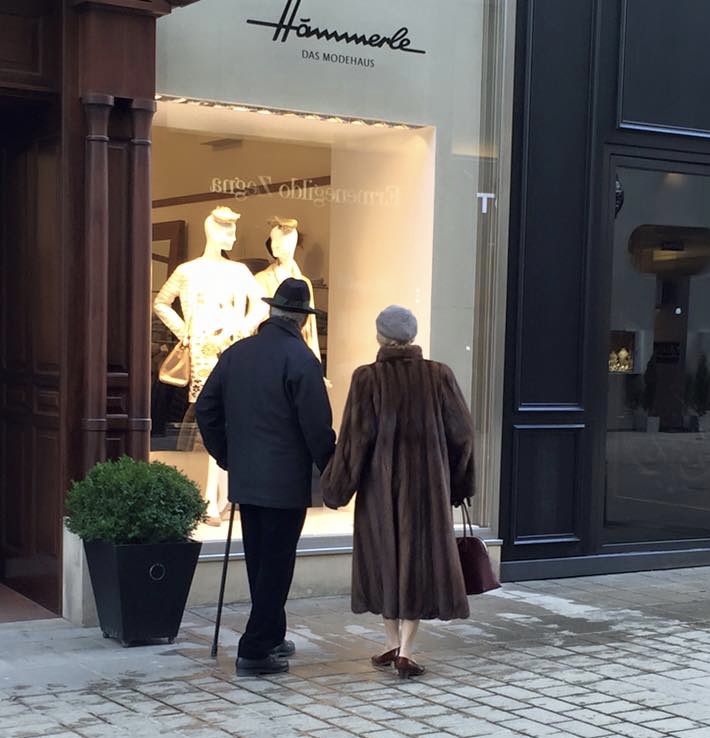