Wishing You All A Merrry Christmas

Man holding a cup in his right hand;
Fur around his wrist.
Sitting in a chair;
The light is from his face.
I don't know who he is;
Could be Santa.
He has a candy cane by him, by his cuff.

He could be home, at the North pole, relaxed after his big journey.
He could be sitting enjoying his cup of coffee after getting done traveling around the world on a cold winter night.
He hasn't put cream in his coffee yet. I don't think it is coffee because there is no steam. He must be done with his night. Or it could be cold coffee. You can't stick your finger in it either cause it's just a piece of paper.

He could be at the stable.
He could be up North taking his last sip of coffee before the start of his night on Christmas eve. Or it could be taking place where the first part of his day is started.

He's by himself.
Could be coming home to his wife, “hello honey”.
It's not his face, no comb.
I see red and a baby climbing through the dog door.
“Silent Night” is playing after his long night out or “Away in a Manger”.
He's toasting to someone, Merry Christmas, to everyone. 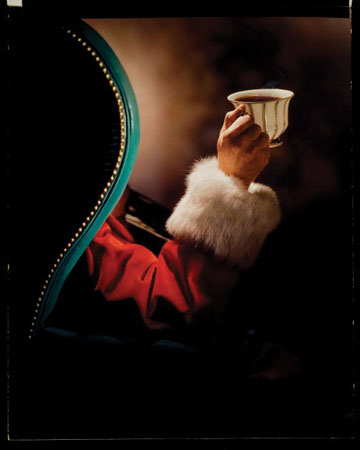