It’s their first date.
The couple is used to being with each other.
They’re neighbors.
She invited him. She’s smiling, he’s a little serious. It’s a simple room.
Now they’re arguing over who will pay the check.
No one will pay; she invited him.
His name is George, hers is Yaffa. Oscar and Katarina.
They’re in the kitchen of her house.
They’re not in the kitchen, they’re in the dining room.
They’re in Los Angeles.
They don’t have shoes! Both of them!
They know each other very well; they’re friendly, they’re drinking.
They’re married.
They’re not married; that’s why they’re smiling.
He doesn’t look happy.
Maybe she cheated.
They have problems with money.
She has the money; he has to ask for it.
She says, “How much do you need this time? You only use it to take out other women.”
He says, “Prove it!”
They’re talking about love, or something.
She says, “Maybe you’d like to come to me to make love.”
He says, “Yeah!” That’s why he’s smiling all the time.
He says, “It’s a deal if you buy me some shoes.”
She’s the wife. He came from work; he’s very tired. The woman wants to give him a nice date.
They’re talking about love.
She says, “I like you.”
He says, “I love you.”
She says, “Don’t love me.”
What can he say?
She says, “You must be feeling the effects of the wine. I put a little something in it.”
He says, “Oh dear,” and falls asleep on the table.
She says, “That’s a nice place for you to be. I’ll take my money back.”
He’s all mixed up. First he loves her, then he doesn’t love her, he likes her, then he doesn’t like her.
He says, “Let’s go home.”
He’s angry. Look how he’s holding the table. He works. She doesn’t work, just sits at home and dreams.
He’s the bum!
They’re very happy together. They’re smiling…without shoes.
Because they’re at home. She’s like a child.
Maybe they went to bed together.
He’s smiling, because he asked her to buy him some teeth, and she said no.
To go to the dentist, very expensive.
He says, “How would you like to go to dinner with me, and I gum everything?”
It’s nighttime, there’s no light outside.
It’s dark out, and they don’t turn the lights on, because there’s a drought, and it looks terrible out there.
He’s young. She looks like a mother to him.
He’s looking at her like he has something to ask her: “Love me!” Fix my teeth!”
He says, “Put on your shoes. Your toes smell!”
She doesn’t like to cook. She only wants to go to a restaurant, and he gives her the money.
He doesn’t cook either.
They’re eating fish.
I like salmon.
And French fries.
I like French fries better than salmon.
Not me!
I like salmon. But she wants special food. I don’t know what she wants. He doesn’t want to go.
They’re eating filet of sole. Because he doesn’t have teeth. Filet of sole is soft.
They’ve been thrown out of good restaurants because they don’t wear shoes.
The woman always has the last word.
He says, “Come drink with me, make love with me! I’ll pay for everything!”
She has the last word. When he falls asleep, she takes the money and goes out on a date. 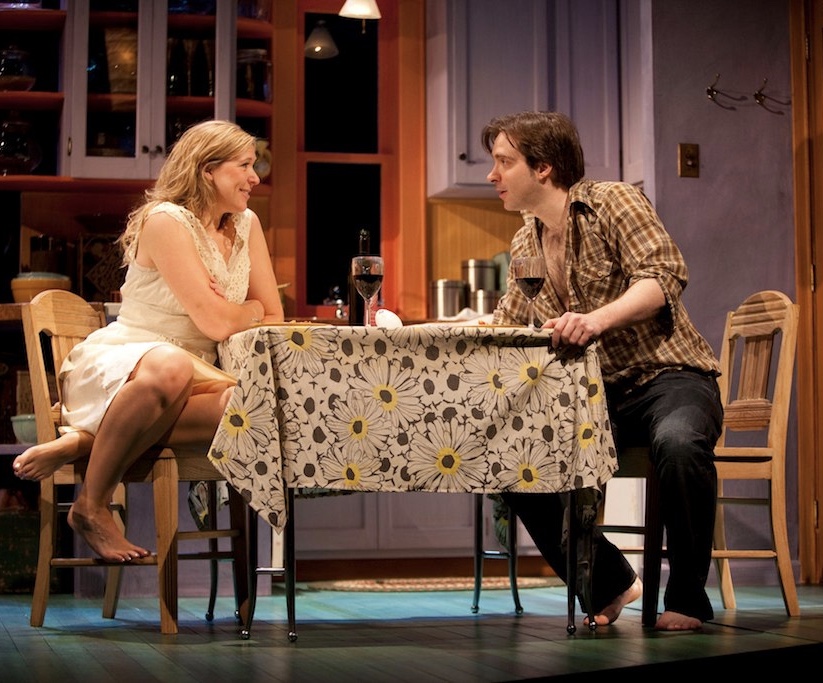