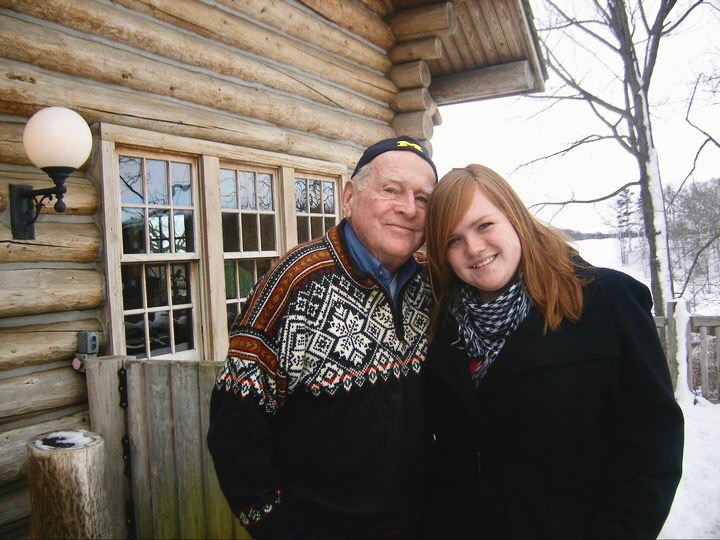 TimeSlips: More Than an Activity

I was introduced to TimeSlips about eight or nine years ago while I was a student at the University of Wisconsin-Milwaukee, studying musical theatre.  I had a bittersweet farewell, as I imagine most do, when leaving for college. Just one year earlier, when I was just a senior in high school, my father was diagnosed with Alzheimer’s disease. I struggled with the news, influenced by the endless negative depictions I had seen of Alzheimer’s in the media.

Immediately, I became fixated on the idea that my dad wouldn’t recognize me or would forget my name. I was scared that I wouldn’t know how to talk to him anymore and I was nervous to leave my mom with all the responsibility of being his primary care partner. My concerns were quickly overshadowed by  the excitement of college and starting a new chapter in my young adulthood. It seemed easier to replace my worries with excitement, though I now realize that was just how I needed to cope at the time.

I quickly found a home in my little theatre world, but still felt somehow unfulfilled and disconnected. My path began to reveal itself through my acting classes, but not in the way that I had imagined.

For those of you who have taken an acting class, odds are you were told about the power of living in the present moment. From an actor’s perspective, being in the present moment allows us to portray a more believable character that is completely invested in that world, not distracted by thoughts that live in the past or future. I would soon find new meaning in the significance of this idea while working with my father.

As my studies continued, a trusted professor of mine learned about my father and got me in touch with another theatre professor at UWM, Anne Basting, founder of TimeSlips.

I remember my first meeting with Anne very well. Until that moment, I was embarrassed to admit that my dad had Alzheimer’s Disease. Whenever I started to talk about it, my voice would shake, my heart beat faster, and my palms got sweaty. We shared some tea in her backyard, and she started telling me about how she was using creativity as a means to communicate with people with memory loss. She told me about TimeSlips and shared ways that I could positively connect with him. Most importantly, she assured me that my dad was still there. That last part may sound obvious, but until then, I was told that this disease would take my dad away from me, before he passed away.

This meeting gave me hope for the first time in a while. I was eager to take the TimeSlips training and read one of Anne’s books, Forget Memory. I learned that despite what was lost, one thing we both still had was the present moment. As he lost the ability to reminisce with me over treasured memories, we still had that moment where we could be present with one another and “forget” (for lack of a better phrase) about everything else. In that moment, we were able to experience new things together for the first time. There were no expectations, just an openness to be with each other as we were. I used a series of Beautiful Questions to facilitate this shared experience, which lead to some of the most meaningful conversations I ever shared with him.

In the final week of my dad’s life, that dreaded moment came when he didn’t remember my name. And you know what? It wasn’t all that bad. We had established our relationship beyond names, memories, and even words. In those moments, I felt that I was still a comforting and familiar presence to him. A presence which was powerful enough to transcend spoken language.

My father passed away a few months before I graduated. If it weren’t for TimeSlips, I  would have continued to distance myself, afraid of my dad getting worse and ashamed for not knowing how to be a good daughter during this pivotal time. Instead, I learned to be present and meet my dad in a space that was accessible to both of us. I learned that we are more than our memories. In fact, in many ways, a part of who we are is revealed as memories fade. I witnessed my dad get a fresh perspective on life, one where he would happily stand to look at the clouds and take in every bit of nature’s beauty. I learned another crucial lesson from watching my incredibly selfless mother provide great care of my dad. Even when things were tough, she remained patient, open, and loving, celebrating all the great things that made him who he was. In doing so, she upheld every bit of his dignity through the disease’s progression. She helped him keep his individuality intact, which was so important to his general well-being.

Despite losing my father, I feel incredibly lucky for the quality time I got to spend with him after his diagnosis. As I continued my journey using TimeSlips in various settings, the importance of these core concepts became even clearer. Many people know TimeSlips as a fun activity to do with elders with memory loss. To me, it’s much more than that. I have used it to mend relationships, to bring relief to care partners, to make inventive, collaborative art, and to provide important social roles to people who have otherwise lost those opportunities. To me, TimeSlips is more than an activity, it’s an essential tool for facilitating invaluable, meaningful connections.

Sammy Goodrich is the founder of Stage Right, which creates original musicals with people with Alzheimer’s. She is now a TimeSlips Certified Trainer, managing the training of 25 nursing homes across Wisconsin. She has used TimeSlips as a personal and professional caregiver, and piloted the Tele-Stories program, which offers TimeSlips sessions by phone to under-connected elders.

Care Homes as Cultural Centers – What Does that Mean?
What a Year it Has Been for TimeSlips!
We use cookies on our website to give you the most relevant experience by remembering your preferences and repeat visits. By clicking “Accept”, you consent to the use of ALL the cookies.
Do not sell my personal information.
Cookie settingsACCEPT
Manage consent