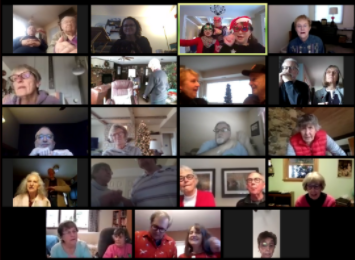 In her new book, Creative Care: A Revolutionary Approach to Dementia and Elder Care, Anne Basting poignantly described several concerts by a chorus of people living with dementia along with their care partners. I am privileged to be the co-founder and coordinator of that chorus, named the On a Positive Notes by one of the singers. In that chapter, Anne described her love of singing and the joy that singing brings to her mother, now living with dementia and residing with Anne’s father in a continuum-of-care community.

In light of our year of pandemic, one sentence in that chapter stood out for me. Describing the concert she attended in 2016 with her two sons, Anne wrote: “We were all one—inhaling and exhaling with sound and rhythm, with words we all knew by heart, without fear of forgetting” (p. 191).

What she wrote was true, but it has now taken on a darker meaning. That happy unity people experienced when inhaling and exhaling now portends the possibility of spreading infection by a deadly virus.

Our chorus—a program of Fox Valley Memory Project (https://www.foxvalleymemoryproject.org/) has not been able to gather in person since the end of February, 2020, when we joyfully started to prepare for a spring concert season and celebrated by eating pieces of three kinds of homemade pies. No longer could we ride a slow elevator to the second floor of a former Catholic elementary school, now repurposed as a senior center. No longer could we gather in one of the classrooms around a decrepit upright piano played by remarkable musicians. No longer could we greet one another with hugs and whispered concerns about how a loved one is faring.

The chorus was all about community. Several members had participated since its founding in 2014. They always warmly welcomed new members. Everyone wore a nametag which helped us know one another’s names and also reinforced the notion that dementia or not, we were all in this together.

It was that kind of community feeling that undergirded my writing a new book called Dementia-Friendly Communities: Why We Need Them and How We Can Create Them (2021, Jessica Kingsley Publishers; available on Amazon and independent bookstores). I handed in the manuscript on Halloween, 2019, full of happy anticipation of giving talks in 2020 about ways communities can include and support people living with dementia.

Of course, our chorus had to stop gathering in person at the senior center. However, that did not mean the end of musical creativity and our joy in connecting with one another. Starting in late March, our brilliant director, her husband, and her music major daughter stuck at home because her college had gone online, created videos featuring the songs we had planned to practice and present at spring concerts. Dressed in silly costumes, they sang and acted out songs like “Surfin’ USA,” “Here Comes the Sun,” and “Under the Boardwalk.”

Chorus members responded happily to these videos. Every week for several months at the beginning of the pandemic shutdown in Wisconsin, we received an email from the director giving us the link to another silly video. Emailed replies from chorus members testified to their joy.

I recently talked with a faithful chorus member who told me she watches the videos frequently with her mom who is deeply into the journey of dementia. Her mom, once a drummer, moves her hands in time with the beat.

I know how her mom responds to music because our chorus is now meeting on Zoom. Of course, we have to be muted because we haven’t got the technology to coordinate our sound, but our director leads us in the songs and we all look at the words on our screens. Some of us are more comfortable singing like this because no one else can hear us!

We have learned several important lessons from these Zoomed gatherings. First, and most regrettably, not everyone can participate. The Zooming may be too confusing for some, and several chorus members are unable to participate because they lack the equipment and/or the internet access. One couple even drives to a local library where they can sit in their car and sing with us using a cellphone and the library’s hotspot.

Another lesson has been the importance of community in these difficult, isolated times. We don’t just sing in these sessions. Our director often pauses between songs to ask everyone a question, not unlike the Beautiful Questions of TimeSlips. Everyone is given the opportunity to respond. We are patient with one another. We are supportive of one another. And we celebrate one another.

In addition to our Zoomed singing and silliness, Fox Valley Memory Project has supported distribution of small gift bags to the On a Positive Notes. We include those who cannot participate in our Zooming because we don’t want them to be forgotten. We also make phone calls and send cards.

In other words, in these challenging times, we are finding new ways to support a dementia-friendly and inclusive community!

Susan H. McFadden, Ph.D., is Professor Emerita of Psychology, University of
Wisconsin Oshkosh. In 2021, she helped establish Fox Valley Memory Project, a
nonprofit that aims to create a dementia-friendly and inclusive community in northeast
Wisconsin. Susan wrote the Wisconsin best practice guide to memory cafés, volunteers at
a memory café, organizes the On a Positive Note dementia chorus, and has written a
newly published book called Dementia-Inclusive Communities: Why We Need Them and
How We Can Create Them (2021, Jessica Kingsley Publishers). She has joyfully
employed the methods of TimeSlips Creative Storytelling with memory care residents
since the early 2000s.

Small Actions Can Have a Large Impact
Certified Facilitator Spotlight: Mollie Heiden
We use cookies on our website to give you the most relevant experience by remembering your preferences and repeat visits. By clicking “Accept”, you consent to the use of ALL the cookies.
Do not sell my personal information.
Cookie settingsACCEPT
Manage consent